The latest from Bluesky.

TLDR: Bluesky was announced in 2019 but the legal entity itself was only recently set up. In the meantime, the bluesky community took shape and has taken on a life of its own. There now exists two separate organizations, the bluesky community and Bluesky PBLLC. We’ve been using lowercase “bluesky” to refer to the original open-ended project, and uppercase “Bluesky” to refer to the company with that namesake. Below, Jay wrote a post called “Three Phases” on the origins of bluesky, and Golda wrote “Bluesky-community” to describe what’s been going on in the community.

Bluesky began with an idea, developed into a community, and solidified into a company, in three stages. The formation of Bluesky, PBLLC at the end of 2021 marked the beginning of the most recent stage, where we now have funding and an organization to pursue our mission.

The bluesky project began with a tweet by Jack Dorsey announcing Twitter’s intentions to fund the development of an open protocol for decentralized social media. Many people DM’ed the new bluesky Twitter account to learn more – including Golda and myself. Twitter brought about a dozen of us together in a Matrix chatroom, and that was the beginning of the initial discussions of what bluesky should be. 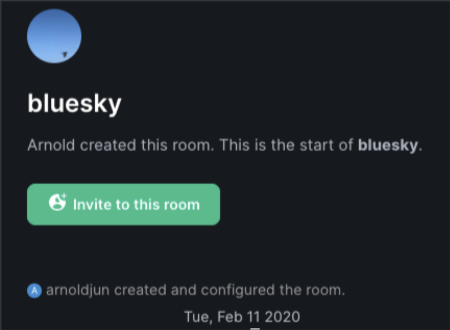 In an initial Q&A in that room, Jack wrote “The biggest and long term goal is to build a durable and open protocol for public conversation. That it not be owned by any one organization but contributed by as many as possible. And that it is born and evolved on the internet with the same principles.” This resonated with us. Twitter’s support for this was exciting, because of all the people who already use it as a platform for public conversation, but we also knew this needed to be independent from Twitter to succeed.

Twitter’s creation of that Matrix room was partly an experiment in self-organization, to see if the direction and leadership of bluesky would emerge from that community. Many people were generous with their time in contributing insight to the discussions, including Jeremie Miller (inventor of XMPP who is now on the Bluesky board), Matthew Hodgson (technical co-founder of Matrix), Ian Preston (co-founder of Peergos), and rabble (early Twitter engineer and co-founder of Planetary). However, around the same time the bluesky community chatroom was created, COVID-19 was beginning to take the world by storm. 2020 threw organizations and personal lives into chaos. Midway through the year, Golda proposed we open up the community to more builders, and I proposed writing an ecosystem overview of existing decentralized social networks.

A diagram from the ecosystem overview

We created a bigger version of the bluesky chatroom that grew to around 60 people, and I started writing an overview of all the projects in the space. The ultimate shape of the bluesky project remained undetermined, but the bluesky community was starting to connect people to talk across projects and building up a collective knowledge base in the form of the ecosystem review.

Sometime in 2020, Twitter put out a request for proposals to the community group. Several of us wrote technical proposals on how we thought a novel decentralized social protocol could work, either building on existing protocols or starting from scratch. In 2021, Twitter interviewed people for the role of bluesky lead, and ended up nominating me. I say nominating rather than hiring, because rather than starting to work for Twitter, I started spinning up an independent organization that would receive funding to make bluesky a reality.

I knew there was going to be a lot of press when I was publicly announced as bluesky lead, but I didn’t have anywhere to direct people yet, so I asked Golda to help with opening up the bluesky community to anyone interested in joining. Her side project was a social events startup that could help cover the costs of hosting and moderating a public community until the Bluesky company got set up. On the day of the announcement, we launched a blueskyweb.org site that I put together, and a bluesky Discord and blueskycommunity.net site that Golda put together. We discussed how to best channel the enthusiasm of newcomers in a productive direction, and decided to direct energy into core topics and existing projects. This ended up creating a lively forum for debate and discussion, becoming a unifier for once disparate conversations.

In the last few weeks of 2021, we got the Bluesky PBLLC established and funded. We decided to keep the community as a separate organization, funded through grants from the Bluesky company, so it can function as an inclusive forum while the company pursues more focused research and development. At the Bluesky company we want to start being more public, having more conversations with companies besides Twitter, and engaging with other protocols, but first we need to finish hiring and articulate the technical vision for our proposed direction. In the meantime, the community continues to be a place for discussion and debate, where we participate but do not drive conversations.

When I saw the announcement about bluesky I felt this effort was tremendously important, but also could be really hard to get right. My perspective on it was shaped by work in risk, where we have organized attackers, and human rights work, where we can see the effect on people of both authoritarian control of networks and the real dangers of disinformation tactics. If Bluesky can enable open public conversation that is resistant to manipulation, yet in which players can innovate and evolve rapidly, then we really have something.

I had a related effort I was working on, WhatsCookin, which relates to building communities and also decentralizing control. So when Jay asked if I could help open up the bluesky community, we leveraged WhatsCookin where we have this global team of developers and community-oriented people who could help plan events and actually help dogfood the tech in the process. For example, right at the beginning we bridged the Discord to a set of Matrix rooms. And we got to see what the limitations are of bridges in terms of threads, reactions, and stability. The great thing is that people in the dweb ecosystem are enthusiastic about participating, so we had core people like Thib Martin in the Matrix community helping fix the bridges and ensure they were working.

The most visible effort has been the Community Voices audio series that we produce in collaboration with the Bluesky organization. The series, conducted on Twitter Spaces, is led by Robert Schwentker, who organized the nascent Twitter developer community a decade ago and since has been involved with web3 efforts globally. The topic for each episode delves into critical components and challenges of the decentralized web ranging from Identity to Storage, Reputation to User Experience. We invite experts and leaders in the space to discuss the technical, social, and historical nuances, and include "skeptic" voices from more traditional and corporate backgrounds. 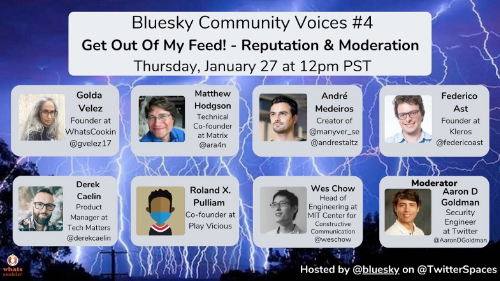 One of the many community voices sessions on Twitter

The goal of the bluesky community, as distinct from the Bluesky organization, is to foster collaboration in the decentralized web ecosystem. It's a very organic approach. We have an open perspective. We also share the Bluesky objective of driving adoption of decentralized tech, so we try to give a platform to different players, hold educational talks and forums, and do small projects to give developers a chance to work together and learn new tech. The community space, which is this bridged discord/matrix forum, has groups from the fediverse, matrix, ssb, gun, ceramic, solid, peergos, holochain, metamask and more. We believe that “work talks” and anyone can lead an effort if people are interested in following. So in addition to the organized forums we put on, anyone can schedule a "pop-up" about subjects related to the dweb ecosystem.

We recommend newcomers start by reading the Ecosystem Review Jay wrote as a guide to the space, then actually meet the people working on them and dive in. In a lot of ways it feels like the early days of the Internet, where people shared whitepapers of algorithms and prototypes of new browsers person to person, before they took off and shaped the web. Non-developers are welcome as well, because there is plenty to do around communicating and organizing. So whoever you might be, you're welcome to join us — enter through blueskycommunity.net.

Are you a React Native expert? Have you written multiple mobile apps? Are you confident building animations, gestures, UI state managers, and everything in between? Then we want to hire you!

Built with ♡ by friends of bluesky. RSS